Iron removal is particularly important in silica sand processing and sand washing plant.
The existence of iron impurities greatly reduces the use value of silica sand and affects the quality of products. For example, in glass production, iron impurities will do great harm to the production and quality of glass, especially to the thermodynamic properties of glass melting process and the transparency of glass products. Therefore, it is very important to improve the quality of silica sand and reduce the content of iron in the production process. In the actual production, the raw materials are first washed and desliming by water, then the iron elements in quartz sand are removed by mechanical scrubbing, magnetic separation, flotation, ultrasonic cleaning, acid leaching and other processes, so as to improve the use value of quartz sand.

Mechanical scrubbing is to remove the thin film iron on the surface of quartz sand and the iron-bearing materials adhering to the surface of quartz sand by means of the collision and friction between the external force of the machine and the sand grains. For mechanical scrubbing, it is generally believed that the main factors affecting the scrubbing effect are the structure characteristics and configuration of the scrubbing machine, followed by process factors, including scrubbing time and scrubbing concentration. The efficiency of mechanical scrubbing increases with the increase of pulp concentration, because increasing pulp density can increase the probability of collision between particles. The results show that the effect of sand scrubbing density is the best between 50% and 60%.

In principle, the time of scrubbing should not be too long, because the time is too long, which will increase equipment wear, energy consumption and increase the cost of mineral processing and purification. The main equipment of mechanical scrubbing is attrition scrubber. Sinonine was used to scrub quartz sand over 0.3 mm from a local ore. Fe2O3 decreased from 0.19% to 0.10%, and iron removal rate reached 47.4%. Compared with other iron removal processes, the process has the following characteristics: 1) good product quality, can meet the quality requirements of float glass for high-quality silica sand; 2) large output, now some small-scale production enterprises and processing enterprises use this method to remove iron more, because it is low cost and easy to operate, but the iron removal rate is relatively low. 
Ultrasound for iron removal from silica sand
Ultrasound is a kind of high frequency (frequency greater than 20000Hz) sound wave propagated by medium. It has mechanical energy. In the process of propagation, it will interact with medium and produce mechanical effect, thermal effect and hole effect. When ultrasonic waves are emitted in water (or solution), many compression and expansion regions will be generated, resulting in the formation and rupture of numerous microbubbles (cavitation bubbles), which is called cavitation phenomenon. In the process of cavitation, the pressure inside the liquid changes abruptly, which is accompanied by shock wave. The pressure can reach tens of thousands to tens of thousands of atmospheric pressure. Under the action of this shock wave, the iron-containing impurities adhering to the surface of the particles fall off from the surface of the particles and enter the liquid phase, thus achieving the purpose of iron removal. 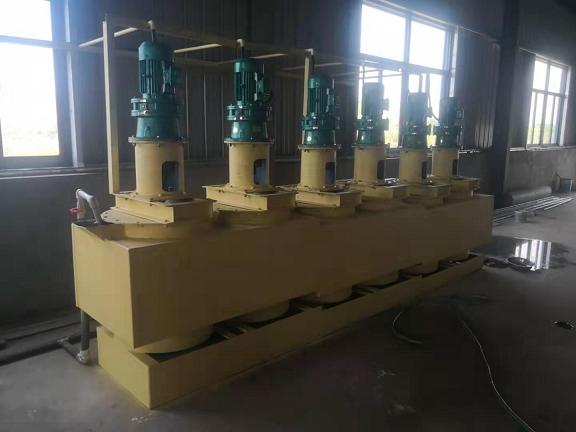 Ultrasound iron removal is mainly to remove secondary iron film (i. E. thin film iron) on the surface of particles. The iron film is firmly bonded, so the mechanical scrubbing method used in mineral processing can not separate it. Ultrasound treatment of natural silica sand containing thin film iron has the characteristics of high efficiency in time period. When the treatment time is 10 minutes, the iron removal efficiency can generally reach 46% - 70%. In the application of ultrasonic iron removal, attention should be paid to the timely removal of waste liquor to prevent the reduction of iron removal effect due to secondary adhesion. The iron removal rate can be increased by 5%-30% by the combination of ultrasonic cleaning and chemical dispersant. The main reason for the enhancement of reagents by ultrasound is that the existence of cavitation not only helps to disperse the reagents and increase the probability of their interaction with the surface of mineral particles, but also helps to dissolve and disperse the reagents on the surface of mineral particles. When removing iron by ultrasonic wave, the pulp concentration should not be too high. Because when the concentration is too high, because the impurities desorbed can not be removed in time, they will be adsorbed on the surface of particles again, so that the effect of iron removal will be reduced. The intensity of ultrasound also has some influence on the iron removal effect of quartz sand. The stronger the intensity of ultrasound, the higher the iron removal efficiency. Compared with mechanical cleaning, this method can not only eliminate impurities on mineral surface, but also remove impurities in cleavage cracks of particles. Therefore, its iron removal effect is better.


Iron removal by flotation from silica sand
Flotation separation is mainly used to separate feldspar from quartz sand by flotation machine. It can also be used to remove clay minerals such as mica and secondary iron from quartz sand. The most typical process is flotation with hydrofluoric acid as activator and amine cationic collector under strong acidity (pH2-3). In iron flotation, NaOH can be used to inhibit the activation of quartz by metal ions; in clay minerals such as feldspar and mica, H2SO4 can not only adsorb positively on the surface of feldspar, but also activate feldspar and mica. Flotation can be divided into three types:

1. Fluorine and acid method
This method is widely used because of its good flotation effect, easy control and stable index. However, the erosion of fluoride ions on land and the destruction of the surrounding ecological environment are very serious.

2. Fluorine-free and acid method
The greatest advantage of this method is to avoid the use of fluoride ions which have destructive effect on the environment, and the production index is stable. However, the corrosion of strong acid on ore dressing equipment can not be ignored. There are higher requirements for flotation equipment.

3. Fluorine-free and acid-free method
Under the condition of natural pH, a unique flotation environment with high concentration of pulp is created by rational allocation of anion and cation collectors to achieve the purpose of preferential flotation of impurity minerals. However, due to the strict requirements for raw sand treatment and slurry environment, it is not easy to control the production. At present, this method has not been widely used to remove iron from heavy minerals. The American silica sand concentrator uses sodium petroleum sulfonate and kerosene as collectors under acidic conditions to separate biotite and iron ore, which reduces the content of Fe2O3 from 0.12% to 0.18% to 0.06% to 0.003%. Flotation iron removal process is simple, low cost and good effect.

After flotation, the harmful components of quartz particles are connected on the surface in the form of spots or inclusions. To remove these impurities, acid leaching must be carried out. Acids commonly used in acid leaching are sulphuric acid, hydrochloric acid, nitric acid and hydrofluoric acid. The above acids are effective for the removal of Fe, AI and Mg. It is found that hydrochloric acid is better than sulfuric acid in the removal of iron. Because the harmful components of quartz sandwich are mineral aggregates rather than pure minerals, the acid leaching with mixed acid is better than that with single acid. The proportion of various acids and the order of addition also have a great influence on the removal of impurity minerals. Acidic concentration should be suitable, acid concentration is too low, time-consuming, low output and impurity removal effect is not good; acid concentration is too high, not only will increase costs, aggravate the corrosion of equipment, but also will reduce the production of SiO2.

The acid leaching temperature has a great influence on the removal rate of impurities in quartz. The lower the temperature, the slower the reaction speed and the longer the reaction time. The higher the temperature, the faster the volatilization of acid, thus increasing the amount of acid. In addition, acid leaching time, mineral size and slurry mixing all have an impact on the removal efficiency. When the impurity content of the product after one acid leaching fails to meet the requirement, it can also be leached twice and repeatedly until the impurity iron content reaches the requirement. In general, the use of sulphuric acid, hydrochloric acid, nitric acid and hydrofluoric acid is expensive and has a great impact on the environment. Oxalic acid was used as leaching agent to remove iron from quartz sand minerals. In this method, leathery acid reacts with Fe3+ on the surface of mineral particles to form a complex and dissolve in water to remove iron, but the dissolution mechanism of iron in this case is different from that of inorganic acid. The advantage of using oxalic acid to remove iron is that a soluble complex (for example, iron trioxalate ID complex anion) is formed during leaching, which can be decomposed under the action of microorganisms and sunlight. Oxalic acid for iron removal has certain requirements on ore size. Generally, it is required to grind the ore to an average size of about 20 um, and the iron removal rate can reach 80% - 100% after more than 3 hours of ore treatment. After acid leaching treatment, high purity quartz sand with SO2 purity of 99.99% and Fe content of less than 30 ppm can be obtained.