Sinonine has developed a high efficiency processing of high purity silica sand with low iron, which can process quartz stone into quartz sand concentrate with iron content lower than 20ppm and SiO2 content higher than 99.9%.

Quartz sandstone is a consolidated clastic rock with quartz clastic content of more than 95%, which comes from various magmatic rocks, sedimentary rocks and metamorphic rocks. The associated minerals are feldspar, mica and clay minerals, and the cement is mainly siliceous cementation. Quartz sandstone is the main material source of silica minerals for glass, ceramics, foundry and other industries. Because quartz sandstone contains impurities such as associated minerals and cements, it can be used industrially only after beneficiation and purification. In recent years, with the rapid development of glass industry and new energy industry, the amount of quartz sand is increasing, and there is a big lack in quartz sand for glass industry, which is far from meeting the needs of economic and social development and strategic emerging industries. Sinonine has developed an advanced processing of high purity silica sand. The production process is as follows: 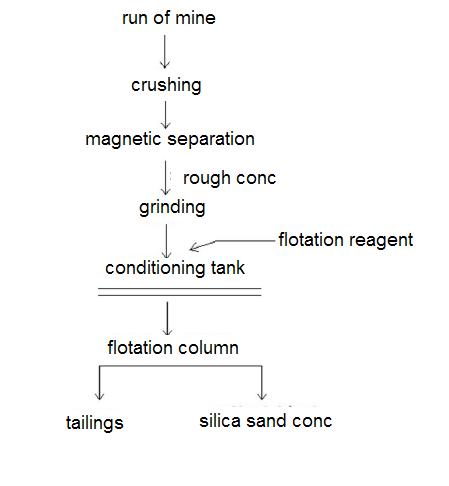 The production steps include the following steps:

The grinded quartz sand coarse concentrate is added into the slurry conditioning tanks, the quartz sand flotation reagent is added, and the slurry is mixed. The flotation reagent includes collector and frother. Add the collector and mixing for 4-20 minutes, and then add the frother. The collector is a combination collector, a mixture of mercaptobenzothiazole and isopropylxanthate acrylonitrile ester. The foaming reagent is 2 # oil or terpineol oil. The dosage of collector is 150-300g/t, and the dosage of foaming reagent is 50-100g g/t. In the flotation column, the material captured by the collector is spilled from the top with the foam, and the material that is not captured is discharged with the underflow.

The flotation column has better effect on the collection of fine minerals. After grinding the quartz sand coarse concentrate to -200 mesh for more than 85% or even more than 90%, the impurity minerals are fully dissociated, and the collector can be fully captured by the collector so as to follow the foam overflow to remove, thereby improving the grade of quartz sand concentrate.

Suggestion: before using this production process, it is necessary to test the quartz sand raw materials, determine the reasonable experimental indicators, and then develop a reasonable process flow. Sinonine can provide the whole process service.